When the golf course at Glenelg opened for play in 1927 it was essentially treeless apart from the non-native Pine trees growing on Pine Hill where the clubhouse was sited, and to the north side of Pine Hill in the areas of the current 9th and 10th holes.

After the acquisition of land for Adelaide Airport after the Second World War, construction of the new 10th hole (current 9th) required the removal of some 200 of these Pine trees. The balance of the property was a mix of high sand dunes with native tussocks and grasses, with low ground prone to flooding and vegetated by reeds and rushes.

Late in the war years and the immediate post-war era saw the commencement of a serious tree planting endeavour at Glenelg, with recorded tree species planted including Golden Cypress, Tamarisk, Cedar, Norfolk Island Pine and even Almond trees. 400-500 trees were recorded as being planted in 1953, while a further 500-600 were planted in 1966. Through the 1970s, 1980s and 1990s trees and bushes continued to be planted at Glenelg by well-meaning volunteers, but they were not working to a plan with regards to tree placements, trees species selections, eventual tree size and their future impact on golf holes. Trees were planted to ‘fill gaps’, eventually leading to a golf course with its holes hemmed in tightly by vegetation.

When the last course redevelopment began in 1998, the Club and its golf course architects shared a vision to open up the course more, and a number of tree and bush removals were undertaken across the course during the 6 years of the redevelopment. Opening up vistas to other holes in a number of areas allowed the Glenelg property to appear larger than it felt when all its holes were tightly bordered by dense vegetation.

From 2004 to today there have been on-going treescape management activities across the course, however, there has been no targeted succession plantings in general, and this aspect is one of the key aims of this Course Enhancement Plan.

Photo: 1950s aerial photo over the course and surrounding area

Vision for the Glenelg Treescape

The Treescape today at Glenelg is dominated by non-native Pine trees of the Pinus genus, with an estimated 85 – 90% of trees on the course being Pine species. The remainder comprise a mix of Casuarinas (Allocasuarina species), Tamarisks (Tamarix sp.), Native Pines (Callitris sp.) and Gums (Eucalyptus sp.), along with a few Melaleucas (Melaleuca sp.) in low-lying areas.

This Pine dominated Treescape character is a significant component of the distinctive look and feel of the Glenelg course – in simplified terms ‘sand, turf and pines’. It is proposed that this character be reinforced by future plantings. Native Pines are a smaller adjunct planting to complement the non-native Pines and their continued use throughout the course is to be encouraged. Casuarinas, given their spreading roots and impact on turf quality, and Tamarisks, with their poor tree structure, are both declared weeds which will be removed over time and replaced with Pine and Native Pine plantings.

Characteristic Glenelg treescapes from the the 12th green

As a tree ages it eventually reaches senescence and dies. Pine trees, depending upon their species, have lifespans ranging from 50 to 150 or more years. A number of the Pines around Pine Hill are still original from before the course was founded and are likely well over 120 years old. It is therefore important that some replacement plantings be progressed in an ongoing program of plantings across the course, given that there are very few stands of young Pine trees at Glenelg – examples include right of the 10th tees and left of the 13th tees – and the vast majority of trees are quite mature. More replacement plantings planted over time will provide for a more varied age profile for the treescape.

Location of replacement plantings is crucial. Trees planted in the wrong locations in shaded areas under large trees will not establish well, with poor structure and growth habits likely. New planting locations need to be carefully assessed for adequate sunlight to establish and grow strongly, with no future impact on the play of the adjacent hole when they mature, and with minimal impact on adjacent trees.

Photo: Paperbark tree overlooks the water near the 8th tee

Casuarinas and Tamarisks are not considered suitable trees for the Glenelg Golf Club into the future, for the reasons stated throughout.

Pine tree species present on the course include Aleppo Pines (Pinus halapensis), Maritime Pines (Pinus pinaster) and Stone Pines (Pinus pinea). The Maritime and Stone Pines have the best structure and growth habit and will be the preferred Pine tree species to be planted going forward. Aleppo Pines are on the SA Government’s Declared Plant Policy list and the negatives of the species far outweigh its benefits. Its invasiveness, ability to set seed and the level of management required to keep its form justify the decision not to plant any more of these Pines going forward.

Native Pines (Callitris preissii) that are indigenous to the Adelaide plains and the sandy soils of the coastal belt will continue to be planted as one of the preferred tree species.

Boundary plantings vary in type and density across the course.

This transitioning process would involve the removal of some sections of Casuarina and Tamarisk boundary plantings and their replacement with new plantings on a yearly basis, until the entire boundary is transitioned. It is expected that a staged process that is not too invasive in each year’s scope would take around 8 – 10 years to complete.

The extent of boundary planting replacements are broadly indicated on the Overall Plan. 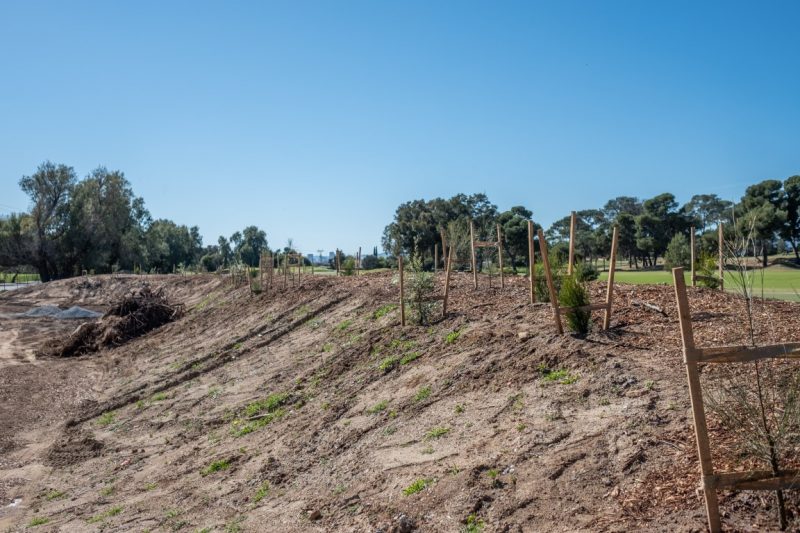 On each hole taken out of play during the implementation process of the Course Enhancement Plan it is planned for tree management works to be undertaken on trees on that hole that require work such as branch pruning, dead-wooding and skirting-up, all essential maintenance activities to ensure tree health and appearance.

Branch pruning, skirting-up and dead-wooding not only improve the health and form of the treescape, but also improve air movement and light penetration for optimal turf growth in adjacent fairways, greens and tees.

Photo: Example of a poor quality Pine tree at the start of the 13th fairway, leaning and overhanging the fairway and planned for removal

Some trees are planned for removal under the Course Enhancement Plan. Reasons for tree removal include:

Trees are also assessed for other aspects such as:

Each tree considered for removal is assessed under a Tree Assessment Hierarchy and the trees to be removed in Year one of the Course Enhancement Plan have all met the requirements for removal.

The Casuarina trees across the course have a considerable impact on the adjacent playing surfaces. Roots from these trees are very invasive, creating a dense, spreading and fibrous mat just below the turf surface, especially under irrigated turf and seriously impacting on turf quality. Where their larger roots come to the surface they are unsightly and can also cause tripping hazards, but in particular wrist hazards if a golfer’s club strikes one during a shot. Just spreading soil over the top of the roots is not a solution, as they will grow up through them. Similarly, root pruning is only effective for a few years. The optimal solution is to remove the Casuarinas and replant with a less invasive species further away from the turf surfaces.

The Glenelg Golf Club occupies an area of land of some 49.3 hectares (122 acres). Tree canopy cover on the property represents 7.36 hectares, which equates to 15% of the overall site area (as measured by NearMap aerial mapping tool). 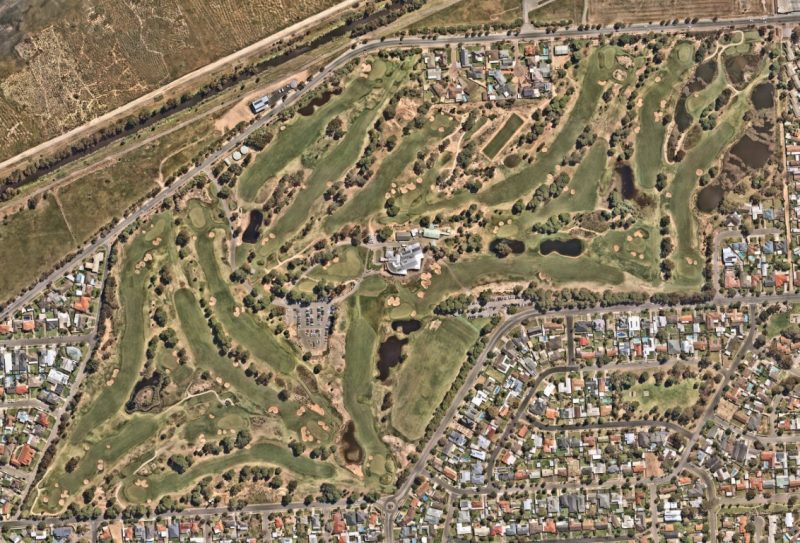 Aerial view of the course and surrounding area, October 2020

It is expected that a minimum of 250 new trees will be planted within the course over the 4 years duration of the Course Enhancement Plan, not including trees planted as boundary replacement plantings. These 250 trees, at an average of 70m2 mature canopy cover, will in time provide an additional 1.75 hectares of additional canopy, around three time the canopy area of trees removed. This will increase the overall tree canopy to around 8.5 hectares, or 17% of the total land area.

While new tree plantings are indicated on the Hole Plans and Overall Plans, these are indicative locations and numbers only, with detailed assessments of new planting locations to be undertaken during the implementation phase for each hole.\

Boundary plantings that are to be progressively replaced with new appropriate tree plantings over a period of 8 to 10 years total 0.84 hectares, representing 11% of the total tree canopy cover on the course.

The Overall Plan includes a Legend that indicates various categories of trees on the course, as follows:

Photo: Excerpt of the legend from overall plan