During the autumn and winter of 1926 a number of Glenelg business men – a group of relations and friends – in search of quietude and relaxation, conceived the happy idea of making regular Sunday morning sojourns in the waste country a mile or so north-east of the outskirts of Glenelg, taking with them a variegated assortment of golf clubs.

Except for one of their number (Mr. Sydney Jackman, afterwards the Club’s first Captain), none of them had ever played golf, but it was not long before every member of the group was stricken – the golf germ is insidious and easily communicable – and by and by they carved a few rough holes in suitably disposed grassy patches upon what is now the south-western part of the links. Soon the excitement of merely hitting the ball at all, or propelling it seemingly vast distances, was exchanged for the age old thrill of a “screaming” drive, a “sound” approach (or two not so sound) and “the regulation” two putts.

The cold winter and rains of 1926 gave way to the warmth and grass of spring. The natural couch grass “links” among the sandhills became a verdant greensward, and the next step in the progress towards the birth of Glenelg Golf Club was natural and easy – the players (by now considerably reinforced) began to speak of acquiring the property and forming a Club.

In September 1926, eight of them (who afterwards became the first Directors) held an informal meeting and decided to approach the Glenbank Syndicate – which had a short time before purchased the land, with other land in the neighbourhood, from the trustees of the late William Henry Gray (one of the pioneers of the State, who in the 1840’s had taken up a large area to the north and north east of Glenelg).

On 22nd September 1926, an agreement to purchase the desired area (comprising 174 acres) was entered into, and on the same day a prospectus was issued with a view to the incorporation of “Glenelg Golf Links Limited.” On 27th October 1926, the Company was incorporated and took over the property.

During the summer of 1926-7 a deep bore was sunk, a commodious clubhouse was erected on the highest point of the links, the work of reticulation and planting proceeded apace, and drains were scooped to prevent possibility of flooding. At this time, His Excellency Sir Tom Bridges (then Governor of South Australia), became a regular and interested Sunday morning visitor, as it was his habit to ride from Henley Beach Road to and over the links.

The bore was a success, yielding a copious and limitless supply of nearly pure water, and 9 holes were ready for play at the end of summer.  It is interesting to record that the gravel bed from which the water is obtained was once, millions of years ago, the bed of the River Torrens, and also, that the scooping operations for the foundations of the clubhouse revealed sawn timber piles – obviously the foundations of a building – at least 70 or 80 years old.

On 23rd February 1927, Glenelg Golf Club was formed, its members consisting of shareholders in the Company and also annually subscribing members, and took from the Company, a lease of the links (the leased portion comprising only the links proper – an area of 124 acres). Mr. A. J. Roberts, then President of the SA Tennis Association, was elected first President, and Mr. Sydney Jackman and Mr. F. G. Hicks respectively first Captain and Vice-Captain.

The Glenelg Golf Links was officially opened on 21st May 1927 by His Excellency the Governor of South Australia, Lt General Sir Tom Bridges KCB, KCMG, DSO.

At 3:00 p.m, His Excellency the Governor of South Australia, drove a ball off the first tee as part of the opening ceremony. The ball was eagerly pounced upon and the ball was mounted and is still treasured as a Club artifact.

A four-ball exhibition match was played by four outstanding golfers – Leigh Winser and Tom Cheadle versus Rufus Stewart and Willie Harvey. Perhaps as befitted the occasion, the match ended in a tie. Leigh Winser filled the position of Secretary of the Royal Adelaide Golf Club and also to State Governors. He was a first-class golfer, beating his age off the stick on many occasions. He continued to do this in retirement at Barwon Heads (Victoria) when well into his nineties. Rufus Stewart was an outstanding professional at Kooyonga despite his gnarled hands sadly twisted by arthritis. Willie Harvey, or ‘Wullie’ as he was normally known, was the professional for Royal Adelaide Golf Club at Seaton, and a popular identity.  His ability at playing the Scottish bagpipes with unbridled enthusiasm must have lowered the house rents in his neighborhood.

The Opening Day was wound up at night with a Ball in the Clubhouse. Over 100 enthusiasts danced the hours away at the inaugural festivity; bridge tables were provided for non-dancers. The decorations were superb, admired by everybody.  A string of coloured lights glamorised the outline of the Clubhouse and rows of electric lights lined the pathway through an avenue of trees to the verandah where the President (Mr A.J. Roberts) and Mrs Roberts received the guests. The ballroom was decorated with silver gum and balloons bubbling among festoons of gold and black streamers, the official Club colours. 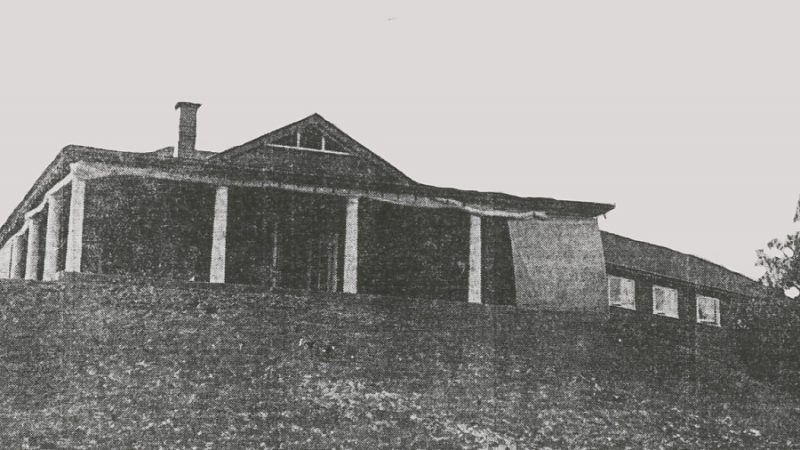 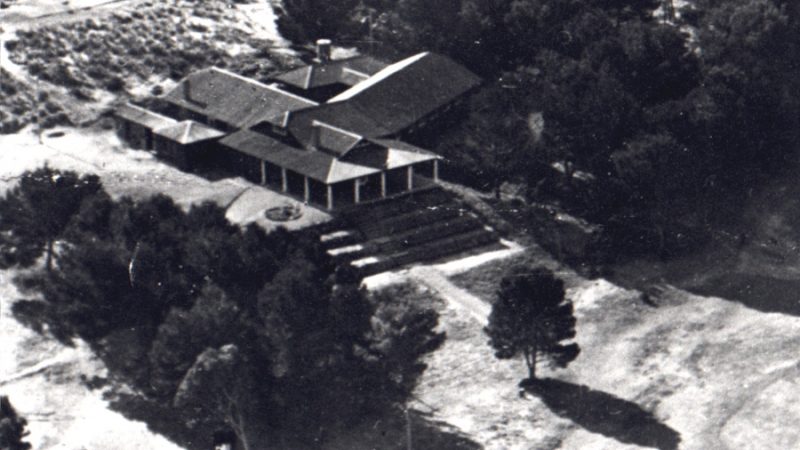 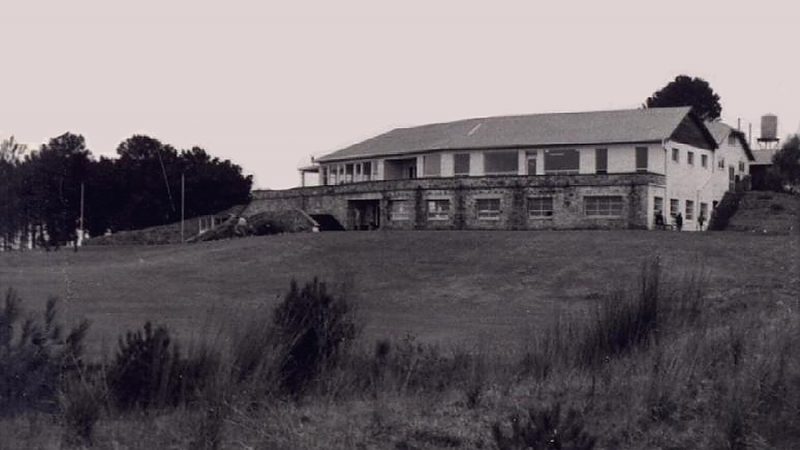 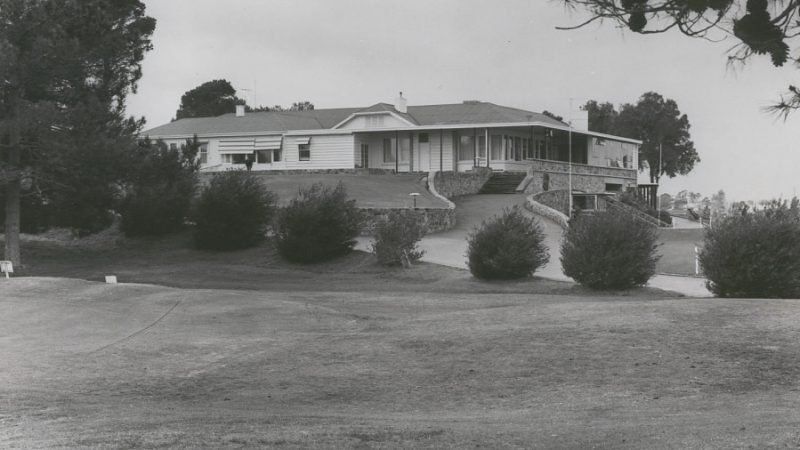 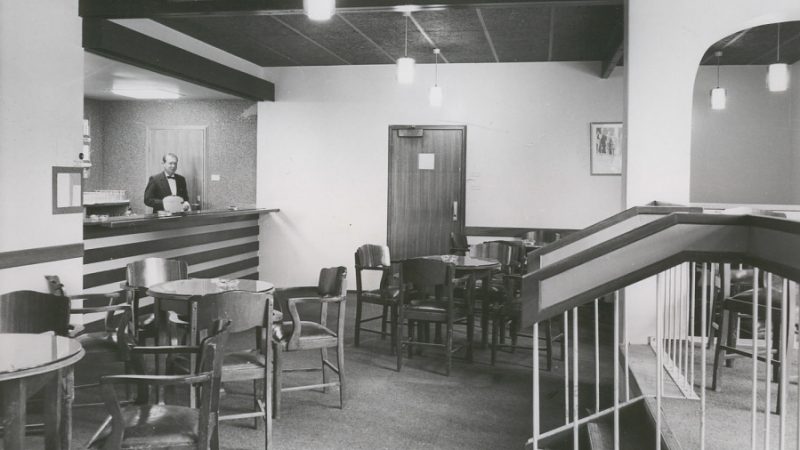 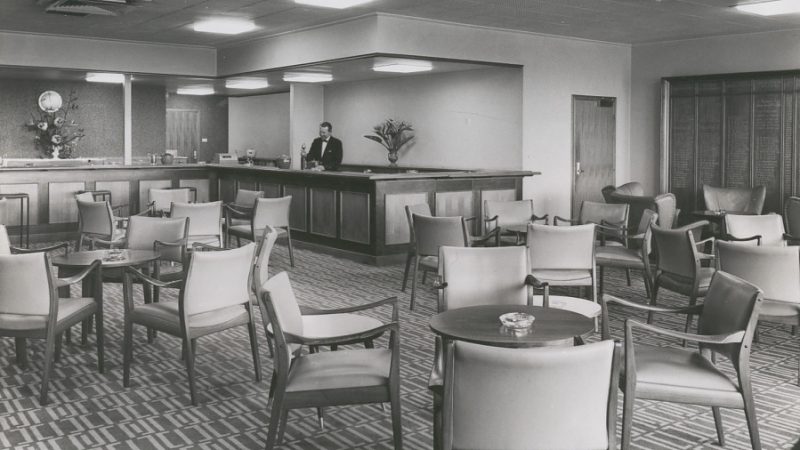 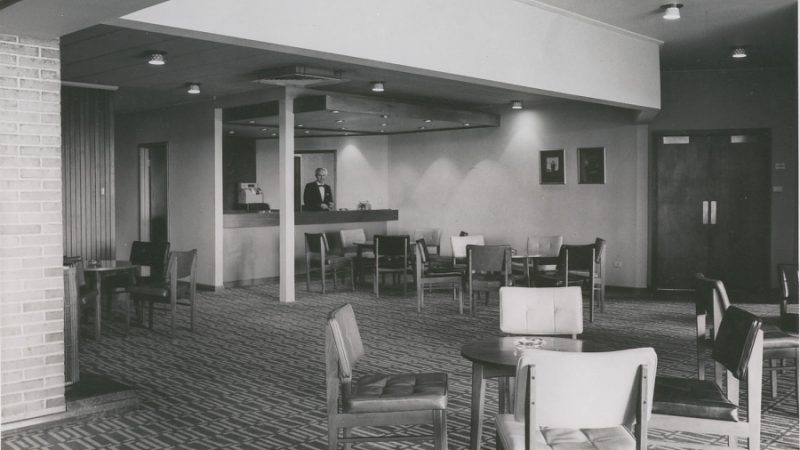 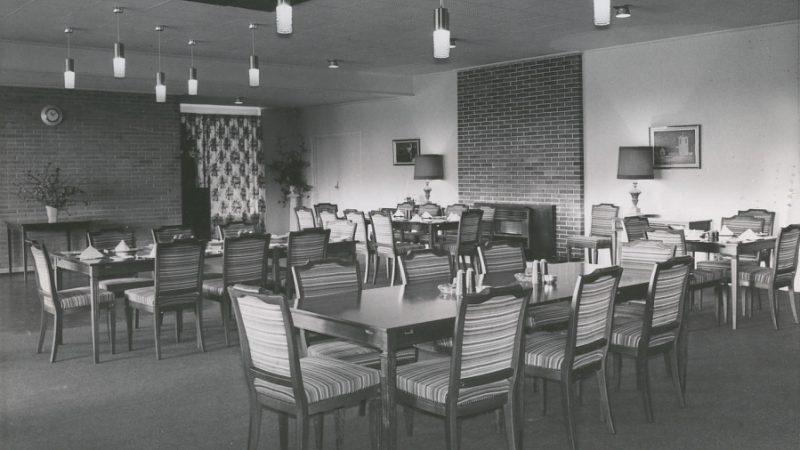 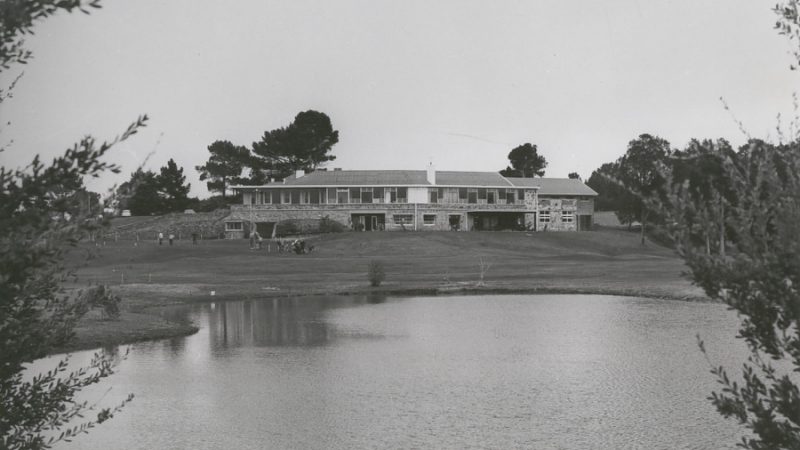 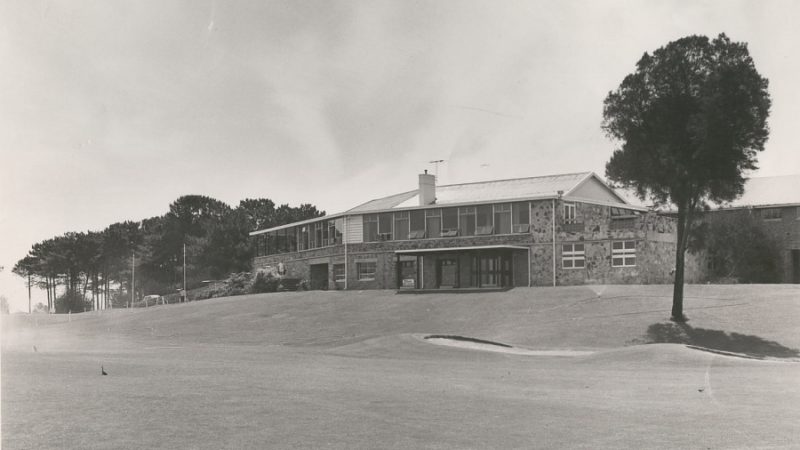 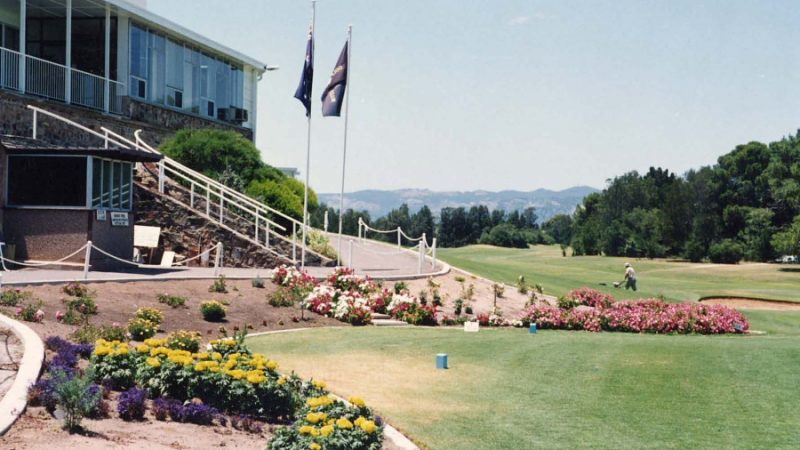 The task of completing the 18 holes was proceeded with – the 3rd and 6th holes were added, and seven new holes north and east of the Clubhouse laid out – and early in 1928, the full course was opened for play.

Soon after, a second bore was sunk, with as good results as followed the sinking of the first bore, and the Club is fortunate in having available all the water required.

Existing natural fairways were used as much as possible, and the Club has always contemplated slight changes in the course which will much improve the last group of holes.

Drift sandhills on the northerly and easterly portions of the links, which to a large extent governed the design of that part of the course, were captured by means of couch and marram grasses with the passing of the years, and minor alterations quickly turned what was already an excellent course on natural links country into a course inferior to few.

At one stage, Mr. Alex Russell, then Australian representative of Dr. Alister McKenzie, the famous golf course architect, was invited to inspect and report on the course. He pronounced the country perfect from a golfing point of view and as sporting a course as he had seen.  He recommended early adoption of the alterations contemplated when the drift sandhills had been conquered.

The depression which arrived towards the end of 1930 impeded the rate of progress, but development has never ceased, with the Club possessing a course which many visiting experts likened to the traditional conception of Scottish links – that combination of grassy flats and hollows, sandhills and rough, watercourses and trees, which cannot be defined but which the cognoscenti recognise at once. Not the least of the course’s natural charms is a large plantation of pine trees across Pine Hill, planted in the late 1800’s.

Established on country which nature could scarcely have improved upon for a championship golf course, the original layout, designed by Mr Herbert (Cargie) Rymill was used for 20 years, before compulsory land acquisitions for the new Adelaide Airport required the course to be redesigned.

In 1947, Mr Vern Morcom of Kingston Heath, was engaged as the architect for the reorientated course, and among many statements he made to members, he said,

“if you carry out these alterations in accordance with the plans, you will not have the best course in Australia, but there will be no better test of golf”.

The statement by Vern Morcom in 1947 still applies, with the course today placing an importance on being accurate from the tee, with little relief around the greens, and providing a testing array of risks and opportunities.

The Club embarked on a major redevelopment project in 1996, starting with the construction of a superbly designed clubhouse with modern facilities and magnificent panoramic views over the golf course and Adelaide Hills.

In 1998, the Club engaged golf course architects, Neil Crafter and Bob Tuohy, to rejuvenate the golf course by returning it to its original links characteristics, converting greens to Bent grass, and conserving and re-establishing native indigenous plants, grasses and trees.

The tall pine trees, which line many of the undulating, couch fairways have been retained and remain a defining feature of the course.

Glenelg Golf Club is situated close to the site where South Australia was proclaimed, as well as the Glenelg beach and shopping precinct.  It is adjacent to the Adelaide Airport and only a short distance from the Adelaide CBD.