The bunkering at Glenelg is a unique feature of the golf course. The style of revetted faces was implemented in the 1998 – 2004 course redevelopment, with inspiration taken from the classic revetted bunkers of the links courses of Great Britain and Ireland. Glenelg is now well-known through South Australian and Australian golf for its distinctive bunkering.
The Club has committed to the ongoing retention of this bunker character through the implementation of the Course Enhancement Plan, but with modifications to improve the sustainability of this maintenance-heavy bunker style.

A reduction in bunker numbers is proposed, which will reduce the area of revetting required, while a decision to limit the height of the revetted faces will further reduce this area. Fully-revetted bunkers will be limited to greenside bunkers, with fairway bunkers being only partially revetted in a new ‘hybrid’ style.
Artificial turf revetting has been trialled on the course over recent years, with the most recent trial being the re-facing of the practice bunkers. The ongoing reduced maintenance of artificial compared to natural turf is an important factor in improving the bunker maintenance sustainability going forward.
These aspects are discussed in more detail below.

A significant reduction of bunker numbers across the course is proposed in this Course Enhancement Plan, in the order of a 30% reduction from current numbers, from 91 down to 64. While the bunker numbers are reduced, the surface area of bunker sand is expected to be approximately the same as currently, given the planned use of larger ‘hybrid’ bunkers across the course. Whilst this reduction in bunker numbers is driven primarily by the desire for more sustainable bunker management practices going forward, there has also been a re-examination of the strategic philosophies of each hole, with a desire to distil the strategic intent of each hole utilising less bunkers in the process.

These twin desires have driven the reduction in bunker numbers. When coupled with the integration of a number of ‘hybrid’ style fairway bunkers, the Club will have a sustainable bunker regime that will provide more than sufficient golfing challenges while meeting more efficient maintenance needs.

Example of Hybrid bunkers at Castle Stuart in Scotland 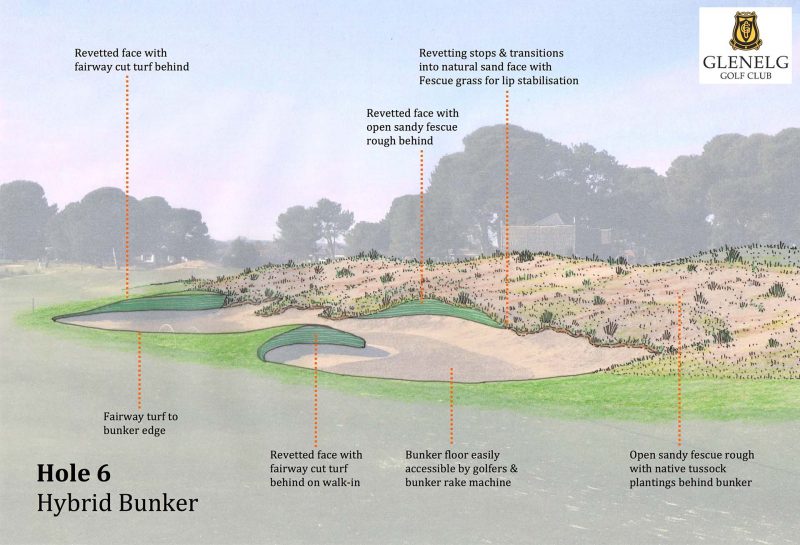 Concept sketch for the Hybrid bunker on the 6th hole

One way of achieving the aims of retaining a strong bunker identity across the course, while reducing maintenance inputs and construction costs (materials and labour) is to construct a number of larger fairway bunkers in a ‘hybrid’ type style. This style would combine traditional Glenelg revetted faces with a more natural sand flashed face that bleeds out into the fescue edges of adjacent sandy rough.
While retaining a distinctive Glenelg character, these bunkers would have the advantage of being cheaper to construct and maintain than a fully-revetted bunker of the same size. Design and construction of these larger ‘hybrid’ bunkers would also allow the ready access of bunker rake machines to facilitate sand grooming.
Visually these ‘hybrid’ bunkers will be a striking feature of the course and would complement the fully-revetted character of the majority of bunkers.
The Castle Stuart course in Scotland, built in 2009 and the host of 4 Scottish Opens, has utilised such ‘hybrid’ bunkers to complement its fully revetted ones. Some photographic examples of ‘hybrid’ bunkers from Castle Stuart are shown. Construction of one of these ‘hybrid’ style bunkers has recently been undertaken on the right hand side of the 6th hole, where three previously fully-revetted bunkers have been replaced by one ‘hybrid’ bunker, and a sketch of how this bunker will look when complete has also been included.

Photo: Examples of Hybrid bunkers at Castle Stuart in Scotland

The question of going from natural turf revetting to artificial turf revetting has been considered by the Club, both from an initial cost perspective along with a likely significant decrease in replacement and life cycle costs. A decision has been made to utilise this material in all future bunker construction works. The Club’s golf course architects are also very keen to maintain the characteristic look of revetted bunkers at Glenelg, and feel that the artificial revetting can be made to look indistinguishable from natural turf except on very close inspection, as the recent trials on the Chipping Green bunkers have shown.

Further measures to generally limit the height of revetting will also assist in controlling construction costs of rebuilding bunkers through the implementation phase of the Course Enhancement Plan. Pre-cut artificial turf ‘slabs’ have been economically imported in bulk for use in the reconstruction of bunkers under the plan.

Currently the turf revetting to bunker faces needs to be replaced from every 5 years to every 8 years depending upon each bunker’s orientation to wind and sun. It is expected that the artificial turf revetting will not deteriorate at anywhere near the same rate, with 20+ year lifespans likely.

Just over a year ago the Club commenced a program of improving golfer accessibility into the bunkers by lowering the walk-ins on a number of bunkers across the course. This program will be continued through the Course Enhancement Plan implementation works so as to ensure that all bunkers are readily accessible by all golfers, especially the older golfers.
This has the double benefit of allowing bunker raking machine access into a number of the larger bunkers providing maintenance efficiency benefits as well.