The 2nd hole is arguably the finest long par 4 on the course and the enhancement works proposed here are fairly minimal. The tees are to be rebuilt to allow a new path to run on the southern side of the tees, taking traffic away from the immediate area behind the 1st green. A dense copse of Casuarinas at the left, opposite the start of the fairway, have been removed and initial shaping has been undertaken to construct a new turf nursery in the vacant land left of this hole, with a new screening dune and ephemeral wetland to be completed. A few trees closest to the fairway on the sandhill at the left are to be removed to better open up the courageous line of play hugging the left side of the hole. The existing fairway pot bunker at right is to be expanded into a larger ‘hybrid’ type bunker, an example of which has recently been constructed on the 6th hole.

The changes up at the green are subtle, with the existing pair of bunkers reduced to just one, as the front left bunker is to be filled in and become a low mound instead. The existing right side bunker is to be removed and reshaped as a turfed hollow, with a new smaller bunker set out in front of the green and covering more of the green approach than the existing bunker. This new bunker will impact visually and physically on more shots, and with the left corner bunker removed, a play out to the left side might catch the high point and kick back onto the green, or it might get kicked away. The green is to be resurfaced in new bentgrass and a new brush fence is planned opposite the green to screen out the adjacent road. All subtle enhancements, in keeping with the Plan’s primary objectives. 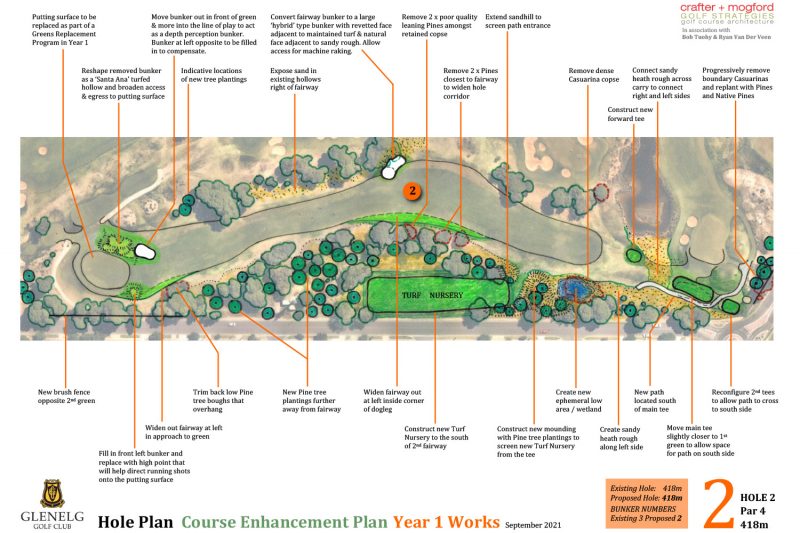 Work at the tees will see the hole lengthened, with an extended championship tee taking the hole length up to 382m from its current 369m. The second tee is to be enlarged and moved slightly east, while a rarely used small tee to the west is to be removed in a redevelopment of the access pathways from the previous green. A low rise in front of the third tee is to be knocked down to improve playability from this tee. The fairway on this hole starts a long way from the tee, disadvantaging shorter hitters, and so the fairway will be extended back towards the tee by around 35m. Trees are to be removed and trimmed back along the inside of the right side vegetation to widen the hole corridor and make it easier for shorter hitters to play their seconds around the corner of the dogleg. The outer of the pair of fairway bunkers is to be removed and the fairway extended through here, with the inner bunker to remain. Past the dogleg corner, the fairway adjoining the wet hollow is to be raised for improved drainage and the hollow drained.

The approach to the green and the green itself are to be raised for improved drainage, with the new green to be pushed back and to the right by around 3 – 4m, creating a distinctly two-tiered green in the process. Greenside bunkering is to be reduced from 4 down to 3 bunkers, while the area behind the green is to be revegetated with sandy heath rough and some new Pine tree plantings. These modifications are designed to improve member playability, the hole’s drainage functionality, as well as its appearance. 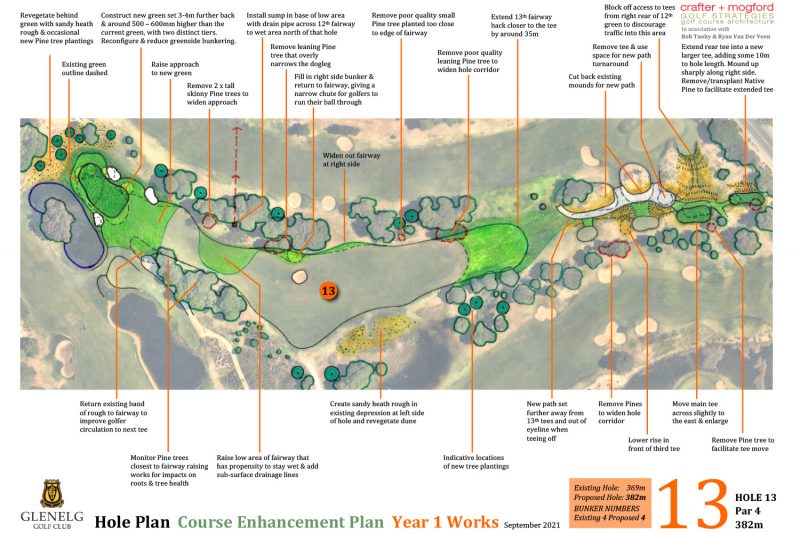 The teeing area on this short hole is to be expanded, with the front three-quarters of the tee lowered and widened for improved wear resistance. The path is also to be raised so the walk up to the tee will not be as steep. Connecting into the carry and extending up between this hole and the adjacent 18th fairway, a series of sandy hollows and ridges will be created to form a separating band of sandy heath rough between the two holes. The fairway is to be widened out to the right around the short right bunker, which is to be retained given the important depth perception role that it plays in the judgement of tee shots at this hole. The two right side bunkers are to be removed and this area right of the green reshaped for a run-off hollow with a high point behind. The left rear bunker is to be reshaped as a smaller pot bunker, with a turfed swale between this bunker and the front left retained bunker. Three bunkers will do the job here of the 5 original bunkers.

The putting green is to be resurfaced in new bentgrass and the adjacent 15th tees are to be rebuilt and raised slightly as part of these Year One works, with removal of the Casuarina tree roots from under these tees. The path from the 14th tee is to be extended along the left side of the hole and will join in with a new 15th tee path. This challenging mid-length par 3 will have its recovery options increased for many of the shots that miss the green, especially right, with more shot options available to golfers, ranging from a putter to a sand wedge. 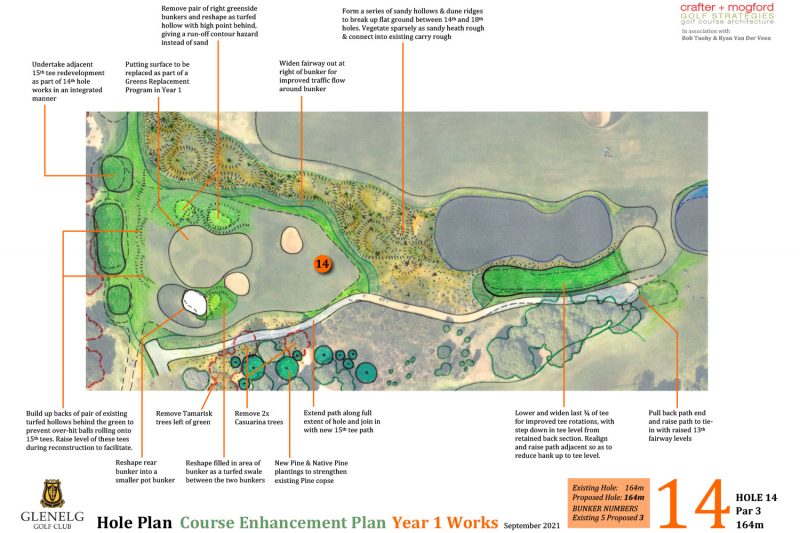 The tees are to be redeveloped at the 18th, and given their proximity to the 17th green, this work will be undertaken as part of the 17th green reconstruction works later in the program. The street trees on Council land outside of the fence to the east and south of the tees have been agreed to be removed by Council, and a brush fence erected to screen the road from the course. A new path will be taken south of the redeveloped tees, close to the new fence. Past the end of the tees a new rear tee for the 15th hole will be built close to the southern boundary and adding metres to the length of that hole. Between this fairway and the adjacent 14th hole, a series of sandy hollows and ridges will be created to form a separating band of sandy heath rough between the two holes. At the left side the existing sandy hollows and ridges here will be similarly enhanced. The left side fairway bunker is to be pushed back by around 15m to provide an increased challenge for longer hitters and is to be rebuilt as a ‘hybrid’ type bunker extending into the sandy heath rough along the left side.

In the approach to the green at the right, the two large fairway bunkers set into the rise below the Clubhouse will be reconfigured as one large ‘hybrid’ bunker. The current bunker extent into the fairway will be reduced to leave a gap between it and the central bunker for shots to run through, as well as for improved golfer traffic. The large rough-cut hollow behind the bunkers is to be turned back to fairway cut, while the access off the green will be widened, also allowing connection direct to the 1st tees for two tee starts. The putting green is to be resurfaced in new bentgrass and works to repair the failing retaining wall next to the lake will also be undertaken. These minor adjustments will see this challenging finishing hole retain its primary characteristics as a spectacular finale to a round of golf at Glenelg. 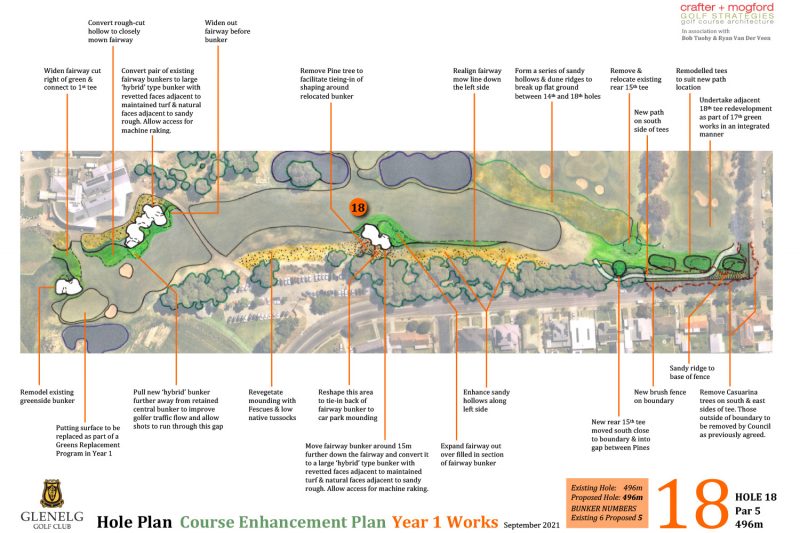