Different sections of the course have been redeveloped since the current irrigation system was first installed. The older sections, such as the 5th and 6th fairways, are over 40 years old and are generally using single row large capacity valve in head sprinklers which are performing well below modern requirements. A number of holes: the 1st, 8th,9th,10th,11th12th and 13th, were upgraded around the early 2000s. The driving range is the newest part of the course, installed at the beginning of 2019.

Pipe systems that use PVC pipes of 80mm and larger often develop failures at junctions such as tee branches and changes of direction. As the age of PVC pipes increases, they become more brittle and are at a greater risk of breaking. Some of the newer mainline, mostly immediately downstream from the pump shed are 250mm and 200mm poly PE100 pipe. This material is a far better pipe material to use due to its flexibility, durability and the fact that fittings can be of a welded type that all but eliminates failure.

The control system hardware is made up of two different control methods. The older parts are a hydraulic control system that uses a pressure-based signal transmitted through a ¼ inch tube, pressurised by an additional pump system that run from the satellite boxes to the irrigation valves. This type of system is no longer used on golf courses or other landscape-based irrigation system due to its high level of maintenance and poor reliability.

The efficiency of the irrigation system is comprised of two main areas, application or distribution uniformity (DU) percentage and the areas being covered by the sprinkler system. There are two outcomes when areas do not receive the correct amount of irrigation: they either dry out, which leads to poor turf quality, or they need to be manually irrigated by hose and sprinkler. Manually irrigating can result in over watering. It is time consuming and takes staff away from other duties. Some manual water of greens is required on most golf courses to achieve the balance between water needs of the grass and the firmness of the playing surface.

Other areas may receive too much water, resulting in excessive growth of turf, usually in roughs, which leads to additional mowing of these areas. It also results in extra weeds, which requires chemical and resource inputs to maintain.

The 5th and 6th fairways have single row sprinklers in the middle of the fairways which provide poor DU% and as a result, significant time is spent on manual watering.

Many areas of the course are overwatered because of sprinkler placement, and sometimes the model of sprinkler. This results in significant areas of rough being irrigated when not required. Areas where this has been addressed over recent years include the driving range, half the 2nd and 4th holes, 8th hole and 13th hole. This is an area where savings can be made with an irrigation re-design.

A modern irrigation system is needed to minimise manual irrigation. It should also be flexible enough to allow for changes in future needs without major works being required.

The table below shows irrigation maintenance costs over the last five years. The years 2017 and 2018 show a steady increase in the dollars spent on irrigation. While the 2019 year shows a reduction in dollars the time spent on irrigation increased. This could be attributed to more work being performed by staff instead of outside contractors.

Given our experience, and no maintenance issues with the new irrigation system on the practice fairway, there would be an approximate saving of 75% on materials and labour costs and 30% on power costs. This would mean an expected saving of approximately $440,000 over five years, or $88,000 per year. 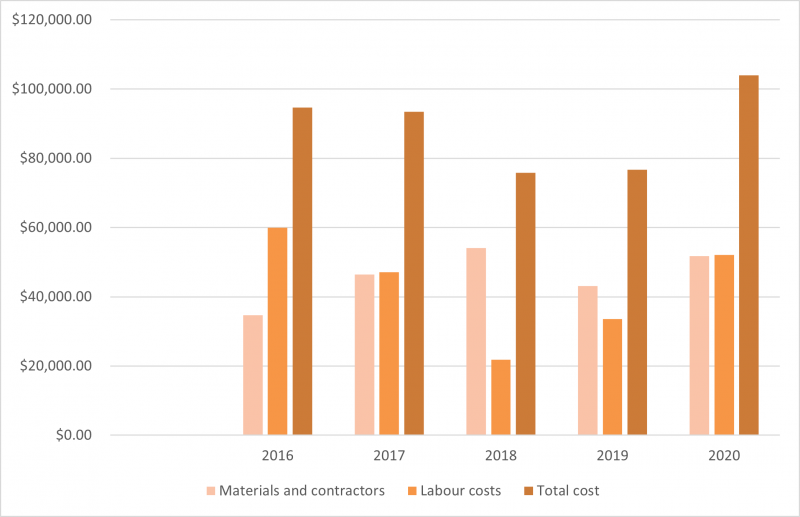 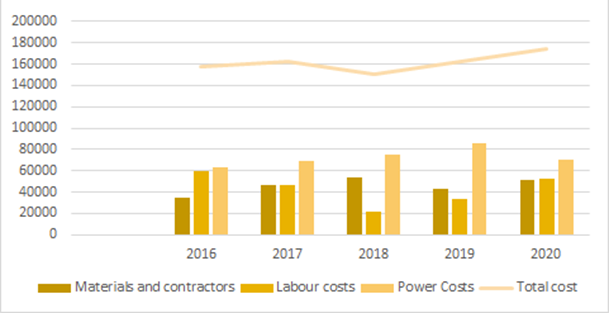 Generally, a golf course central control system can be divided into two parts: field hardware and software and office hardware.

The software being used for all areas, except the practice fairway, is the Toro LYNX system which was the industry leader for many years. Its shortcoming at present, compared to the main alternative, is the lack of two-way communication with what is happening in the field. The signal is sent to the satellite in the field, however, there is no way of knowing if it is operating the valve/s required and no other information such as rainfall, temperature, soil moisture and flow rates can be sent back to the control computer.

As previously mentioned, the majority of the field hardware is old technology and requires a hydraulic system to open and close valves. This also results in the need for a small pump system with redundancy, for the supply of the water used in the control system. At present this is the weakest part of the irrigation system and replacement should be a high priority. The practice fairway, which was upgraded in January 2019, runs the latest control system. Since the installation of the system, there have been no issues with breakages, blowouts, or repairs. The only maintenance needed is the trimming of the sprinkler heads. This system has been well received by the industry and has now been installed into enough top golf courses around Australia to provide a reasonable assessment of its features and reliability.

Current expected water use has been based on the area of different sections of the golf course. This was taken from an AutoCAD file, with changes in the areas being managed as reflected on aerial images. Assumptions have been made to some sections such as roughs, fairway edges, and green approaches and surrounds.

Irrigation quantities are based on the expected water requirements of a high-quality golf course with a medium to high traffic rate.

The calculated water use is slightly higher than actual usage. This would indicate that the golf course irrigation is being well managed.

Expected water use based on industry standards

Four Grundfos CRIE64-3-2 22kW operating at 6.5bar provides 94L/sec or 5640 L/min. In practice this flow rate would unlikely be achieved because of the limiting factors of pipe sizing and the distance water is moved around the course. The pump station control system is matched to the pumps and there are no known issues with the system.

Irrigation central control system (Toro LYNX) is set to a maximum capacity of 80 L/sec or 4800 L/min.

Calculations from pipe sizing and routes were based on a Hydroplan drawing, however, there are some areas where information is missing or questionable. This is due to the age of the system and lack of knowledge in these areas. They are mainly in the 5th and 7th green and 6th tee area, between the 12th fairway and 13th green and the 4th green and 5th tee and 5th fairway.

Generally, the first 445m of main heading south into the front nine holes and 549m of main heading north into the back nine holes are too small for the flows that are being used by LYNX. These pipes range in size from 250mm down to 150mm PVC and should not be subjected to a maximum flow from the pumps of greater than 50L/second to avoid high water velocity in the pipes. Water velocity in pipes should be kept below 1.5m/second. Flows above this rate have two negative impacts.

High flows rates mean high velocity through pipes (above1.5m/sec). This increases friction losses, this in turn requires the pumps to use more power to achieve the pressures and flows in the field resulting in higher than desired electricity use.

Secondly high velocities cause faster wear in pipes at tee sections and bends. This is more prevalent in PVC pipe. It also increases the likelihood of pipe breakages, once again far more likely with PVC pipe.

Once mainline pipe sizing drops to 100mm PVC there is significant reduction on the flows achievable while maintaining the required pressures and keeping flow rates below the recommended 1.5m/sec.

As an indication these areas include the majority of the sub mains that run along most fairways. These are generally 50mm to 80mm pipes and limit the number of sprinklers that can be efficiently operated at any one time in a number of areas. These include the 2nd, 3rd, 4th and 5th holes on the front nine, and the 8th, 9th, 12th, 13th, 15th, 17th and 18th holes on the back nine.

Catch can tests were conducted on 2nd and 3rd September 2019 to determine the distribution uniformity (DU) percent which is a guide on the effectiveness and efficiency of the tested areas. Industry benchmark is 75% with anything below 60% needing more urgent attention. Precipitation (PR) rates are also recorded. The area being tested can be compromised by variations in the width and length of the area and this needs to be taken into account when assessing the overall performance of the system. Thirty six catch cans were used for all areas, with stations being run for 15 minutes to give an accurate result.

While the DU tests provide a relatively good result except for the 5th and 6th fairways, these results are only part of the analysis. Overall the existing irrigation system has weaknesses in the control system, the sizing of most pipes, the age of some of the pipes and other components.

While the below recommendations are generally made in isolation, the total amount of work suggests that a combined upgrade of the entire course be undertaken.

The irrigation control system is a weak point in the system. Replacing it with the system being used on the driving range would see improvements in control, reliability and remove the satellite boxes around the course. It would also remove much of the 240-volt power supply cables that provide a hazard to the staff and contractors when excavating for repair or rebuilding work. Valves and sprinklers would also need to be upgraded at this time to suit the new control system.

The 5th and half of the 6th fairways need the existing single row sprinklers replaced with a multiple row design.

Upgrade of the pipe network

Upsizing the pipe network would result in several positive outcomes.

It reduces the amount of energy required by the pumps to move the water through the pipes by slowing the water velocity which results in a reduction in friction losses.

Secondly it will reduce the watering window allowing the Club to take advantage of savings in off peak power rates, may reduce evaporation by water later in the night when temperatures are generally lower and reduces the impact on early and late golf rounds.

Replacing the PVC mainlines and submains with poly PE100 pipe should eliminate any broken pipes over the next 50 years. The life expectancy for PE100 pipe is a minimum of 50 years with some studies showing it to be greater than 100 years.

Photo: Leaking satellite on the 1st