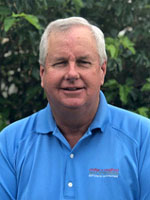 Neil is a 1980 graduate of Adelaide University with a Bachelor of Architecture where he was a member of the University golf team and was selected numerous times in the All-Australian University team. Neil has an illustrious record as an amateur golfer, representing Australia on four occasions, including the 1984 World Amateur Teams Championship, the Eisenhower Cup. He is a founding member of the Society of Australian Golf Course Architects and has over 40 years’ experience as a golf course architect. In 1997 Neil was elected President of the Society of Australian Golf Course Architects and served in this position until his retirement in 2003. Neil has been co-editor of the Society’s annual journal ‘Golf Architecture’ for 10 years, widely regarded worldwide as the premier publication on golf course architecture. Neil has had the invaluable experience of having competed in all the Australian Amateur Championships and Interstate Teams Matches from 1980 to 1992, a level of amateur golf experience unmatched in practising Australian golf course architects.

In 1992 Golf Strategies was formed to combine the skills of Brian and Neil Crafter in Adelaide. In 2002 Paul Mogford joined the team and Crafter + Mogford Golf Strategies was born to reflect the names of the two principals Neil Crafter and Paul Mogford. They have a special focus on and expertise in Master Planning the redevelopment of existing courses and the design and implementation of state-of-the-art practice facilities. A strong portfolio of completed and current projects within Australia includes courses such as The Metropolitan Golf Club, Barwon Heads, Box Hill, Sorrento and Kooyonga Golf Club.

Neil has been involved with the Glenelg Golf Club on a professional level for 40 years, having first worked on course remodelling back in 1981 with his father Brian Crafter. In 1998 Neil and Bob Tuohy directed the 6-year Course Redevelopment that led to a marked rise in the course rankings for Glenelg and he has continued in his role as the club’s golf course architect in the years since. He has a passion for Glenelg given his family involvement at the club – his mother Margaret was secretary at the club in the 1950s and his father Brian was assistant professional for a period, while his uncle Murray Crafter was a long serving Glenelg professional.

Ryan originates from the USA and has lived in Australia for the past 11 years. His golf design and construction background started in the Chicagoland area of the USA where at an early age he was on heavy equipment shaping golf courses before obtaining a Civil Engineering Degree. His strategic design and construction knowledge stems from his early career working with the late Pete Dye on several high-profile projects including Whistling Straits (Three-time host of the PGA Championship and host of the 2021 Ryder Cup). Ryan has 19 years of experience as a Senior Design Associate with Greg Norman Company working in various locations around the world such as; the links land of Ireland, deserts of Dubai, sand dunes in Vietnam, islands in the Caribbean, and pine forests of Spain. Ryan has led redesign projects in Australia and most recently he was senior designer on notable projects like the exclusive Cathedral Golf Club in Victoria. Ryan branched out on his own in mid-2019 offering a handcrafted design/construct product and is now partnering with Glenelg Golf Club.
In November 2020 Ryan was appointed as a full-time employee at Glenelg Golf Club as Project & Construction Manager. Members would have already seen a mountain of Ryan’s work around the course since he commenced. He first renovated over 20 bunker access points in 2020 and has assisted in other course enhancement preparation work; including the 2nd nursery, screening of the 8th hole tanks, and upgrade of the 19th hole. With Ryan having a more intimate connection with the course there is greater value and benefit to the Club, allowing him to integrate more sustainable design and construction techniques. Ryan’s wealth of knowledge and experience has been extremely valuable for our course staff on a day-to-day basis. His design, shaping and project management will be pivotal in executing the upcoming course enhancement plan with Neil Crafter. 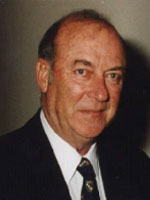 The Tuohy family and name is synonymous with the Glenelg Golf Club. Bob first joined as a junior back in 1952. He applied his craft around the world whilst often promoting Glenelg. He joined forces with architect Neil Crafter in 1998 to assist with the course renovations that would propel the Glenelg up the golf rankings. Bob’s dedication, contribution and input over many years into enhancing the Club, and our brand, is enormous, so much so that he was elected Life Member of Glenelg Golf Club in 2014.

Bob Tuohy played the World PGA Tour between 1960 and 1977. He has 13 Tour victories. A long list of achievements followed with some of the highlights being: 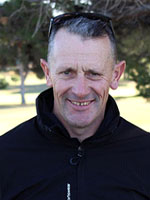 Tim has over 25 years’ experience in the turf management industry. After completing his turf apprenticeship at the Yarrawonga & Border Golf Club in 1997, Tim moved to the Southeast of South Australia where over 8 years served as Course Superintendent at Penola, Millicent and Mount Gambier. In 2005, Tim was appointed Course Superintendent at the Horsham Golf Club in western Victoria where he served 7 years as its custodian. In that time several major projects were undertaken, including the renovation of the course Irrigation system and the rehabilitation of the course after the devastating Black Saturday bush fires of 2009. In 2011, Tim took on the management of the then 36-hole Adelaide Shores Golf precinct where over the course of the next 3 years oversaw construction of the Patawolonga Course 9th and 7th holes, the reduction of the North Course from an 18 to 12-hole short course and a refinement of turf management practices which greatly improved playing surfaces. The refinements implemented were acknowledged in 2014 with the awarding of the South Australian Golf Industry Excellence in Turf Management award.

From 2014, Tim served three years as Course Superintendent at Links Lady Bay with highlights been preparing the course for the Australian Interstate Boys Championships and the 2017 Australian Mid-Amateur. As well as leading preparations for amateur tournaments as Course Superintendent, he also has experience in working in professional tournament preparations, including the 2013 World Cup of Golf and Masters at Royal Melbourne, 2018 Australian Women’s Open at Kooyonga as well as the 2018 World Cup at Metropolitan Golf Club.

Tim has completed both a Diploma of Turf and Horticulture, along with a Diploma of Management and since 2018 has served as Course Superintendent here at Glenelg. In the three years since been appointed he has played a key role in developing a new course maintenance team, implementation of irrigation auditing and improvement plans, including the installation of the Rainbird irrigation system trial on the Practice Fairway. Along with addressing irrigation supply and delivery, Tim has also conducted a Bentgrass variety trial on the Range Practice green which has served as the basis for the choice of grass variety for the future re-grassing of the Glenelg greens surfaces. 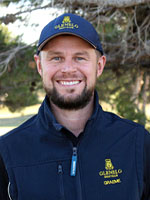 Graeme originates form Edinburgh, Scotland and moved to Australia in 2020. He originally joined Glenelg as our 3lC and was promoted to Assistant Superintendent in November 2020. Graeme brings a wealth of experience to Glenelg with 20 years’ experience in the Greenkeeping industry. He has worked for some of Edinburgh’s most prestigious golf clubs such as Mortonhall Golf Club and Murrayfield Golf Club.

Graeme recently completed his diploma in Golf Course Management, became an R&A Scholar in 2017 and was selected to become a Jacobsen Future Turf Managers Graduate in 2019.
Graeme also has a wealth of tournament experience from around the globe. He was selected by John Deere in 2015 to attend and volunteer at The Players Championship at TPC Sawgrass. He assisted the R&A in 2017 as a Team Leader at The SMBC Singapore Open at Sentosa Golf Club and has also volunteered at tournaments at Kingsbarns and Wentworth Golf Clubs.